Understanding how we got here in the first place.

The evolution of firearms design has gone largely unchanged over the last 100 years. Prior to the introduction of pistol grips on semi automatic weapons, there had hardly been any significant changes to firearms design over the last four centuries. Improvements were mostly made to the firing mechanism, but not the ergonomics or control points. From inception, firearms have been long metal tubes affixed to long wooded stocks. The second half of the 20th century witnessed a few improvements to this simple principle, but those simple design concepts have been few and frequently copied.

The interesting thing to note about firearm design, is how it influences the placement of the support hand. On 19th century and earlier rifles and muskets, one simply placed their hand were ever it felt comfortable on the gun. A notion so simple, it remains the standard to this very day. but once external box magazines started to appear, so did the tendency to support the weapon by them. Considering that magazines are generally located by the receiver, there seems to be something phenomenal about the human mind that wants to draw the support hand as far back on the gun as the magazine is located. With Submachine guns featuring side load magazines such as the MP-18, and British Sten, shooters often would support the weapon by from the side. On Submachine guns like the MP38 and MP40 and PPSH, shooters were inclined to hold the weapon by the vehicle magazine located under the receiver. All of these weapons share the fact that none of them had a proper forearm in which to comfortably hold the weapon. Fear of burning yourself on a hot barrel or barrel shroud was real, and the designers seemed to be fully aware that the mag-hold would be the norm no matter what.

Interestingly, the Thompson M1921 submachine gun was the only exception to this class of arms. It introduced the world to the concept of a separate vertical grip, complete with finger grooves for improved control. Although both the M1921 models and M1928 variants were mainly issued during WW2 with vertical grips, the Mid-war creation of the M1 and M1A1 “side cock” Thompsons were fielded with more a more traditional horizontal forearm running parallel to the barrel. The result is photographic evidence of many soldiers resorting to the magazine holds common on other subguns, while the vertical grip Thompson users kept their hands on the supplied grips. The mindset of shooters seemed to be “If you give me something to hold onto, I’ll use it exclusively, but in it’s absence, I’ll hold onto the mag exclusively.” 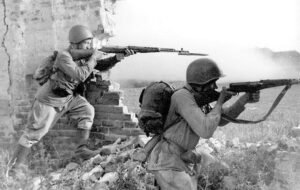 Meanwhile, rifles started to appear during the 1940’s that saw widespread use of external box magazines. Its common to see photographs of soldiers shooting SVT-40’s Gewehr 41 and 43 rifles, STG-44s  and even M1 Carbines while holding their hands against the protruding magazines, but not as much with slick bottom weapons such as the M1 Garand. Post-WW2 saw widespread use of external box magazines, and the almost universal embrace of the “mag well hold” by all armies. Again, there are numerous photographs and films of NATO member nations doing so with L1A1s and FALs, and the M14 as well as rival Eastern Bloc countries doing the same with their curved AK-47 magazines. The Soviets must have picked up on this, as some countries started to issue AKs with wooden vertical grips during this era. 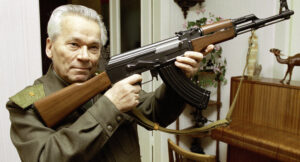 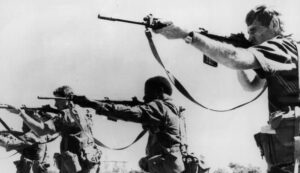 During the Vietnam conflict, American soldiers (particularly SF and MACV-SOG) started to make their own vertical grips for the M16 and CAR-15 variants. These were often made from spare M16A1 pistol grips, but occasionally were hand carved from locally sourced wood. Although not an issued item, it’s interesting to note their limited use. It’s also interesting to note that civilian sporting rifles remained unchanged and unmodified during this evolution of military arms. 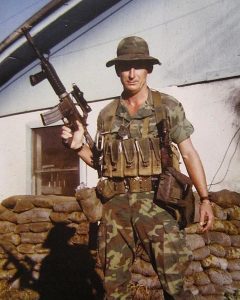 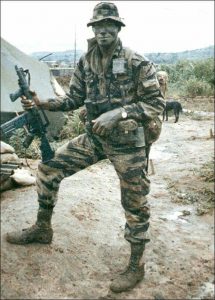 Skip to the 1990’s, and again we see very little advancement in improving the ergonomics or the ambidextrous aspects of manipulating small arms. With the US military’s desire to mount lights and lasers to issued arms, we saw the M4 SOPMOD program gain support and funding in the early 90’s, with the Knight’s Armament Company Rail Interface System (RIS) forearm becoming the new standard forearm. The adoption of a Picatinny rail interface drove the adoption of rail mounted accessories, to include vertical grips, handstops, lights and lasers. The civilian market joined in during the early 2000’s, and nearly 20 years later, we have more choices than ever before. Credit is due to Knights Armament, and the standard issue vertical grip that is included with every service weapon featuring their rail. Mr. Reed Knight believed in this product so strongly, that it was added to the supplied rail cover kit-roll for free, because of the lack of enthusiasm shown for it by the government, when looking at a contract for their rail forearm. Without a doubt, it reintroduced the concept of a forward vertical holding point, which had largely been abandoned since submachine guns lost favor in infantry units. 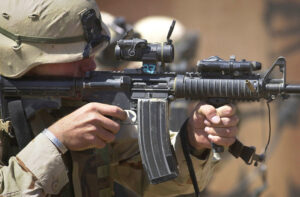 Essentially, this made the M4 carbine the first issued American weapon with a vertical grip option since the WW2 era Thompson. Regardless of this fact, Many issued the KAC grip choose to not use it, while others have mixed reasons why they place it on the rail where the do. Many users found that it worked well as a “handstop” and as a barricade stop, although it is longer than necessary for these roles. The civilian sector picked up on this, and soon “stubby” vertical grips and smaller handstops began to appear in the mid-2000s. Again, more improvements to the idea were made as an aggressive forward hold caught popularity. Arguments about the “thumb over bore” and “C-clamp” type holds flared up on the internet and range. It’s important to note that shooters have always held their long guns where it felt “right” or comfortable, and nearly everyone will support the weapon in a different place based on body position, fatigue and other factors. Simply put, even with the addition of a vertical grip, no one holds the weapon exclusively by it 100% of the time. 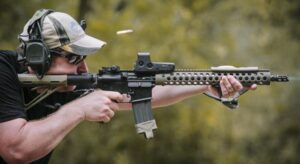 The concept of the GripStop grew out of these earlier concepts, and was created to bridge the gap between a stubby vertical grip, and too-small handstop.  With the vertical grip, the human hand is contorted uncomfortably to fill the dead-space of a right angle if being used to pull the weapon rearward into the shoulder pocket.  With a handstop, the wrist is often forced into a uncomfortable locked position, or the hand slips off its purchase because of the size. The True North Concepts GripStop has a radius to fill the hand comfortably, and texturing to keep it in place. These ribs also allow it to work as an excellent barrier stop, and supports nearly every style of shooting regardless if you have large hands or small. The GripStop is also small enough to be unobtrusive, preventing snags when getting in and out of vehicles, or switching holds on the forearm to accommodate different shooting positions. This might seem like a small consideration, but it’s an important one. The long and short of it is, you have to try one to see if it works for you and your individual shooting style! 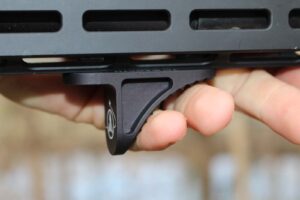